Norwich look nailed on for promotion 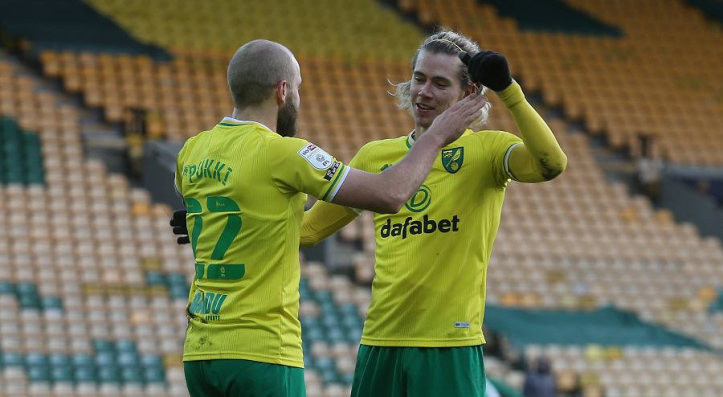 Norwich City restored their seven-point lead at the top of the Championship on Sunday as they defeated Wycombe 2-0.

Brentford‘s 2-1 victory over Stoke on Saturday, having come from behind, had temporarily closed the gap but the Canaries struck through Teemu Pukki and Adam Idah in the second half to claim the win.

It’s now five wins in a row for Daniel Farke’s side who are now 10 points clear in the automatic promotion positions because of Swansea‘s surprise home defeat at the hands of Bristol City. Watford also lost at Bournemouth, meaning Norwich are in a excellent position to automatically regain promotion back to the Premier League.

Watford have continued to struggle on the road this season, with just five victories from 16 away games ahead of this weekend, and Saturday’s clash with Bournemouth was no different. Despite having the lion’s share of possession and opportunities, Watford went behind to a Arnaut Danjuma goal in the second half and were unable to respond in time.

In the promotion chasing pack Reading picked up a good victory away at Rotherham, while Barnsley‘s excellent run continued in their 2-1 defeat of Millwall. Cardiff‘s winning run came to an end but they were still able to pick up a point after a 1-1 draw at Middlesbrough.

At the other end, Sheffield Wednesday are now a huge 12 points from safety and a season in League 1 looms after they squandered a 2-0 lead at Luton to lose 3-2. Wycombe don’t look much better off above them, while Rotherham need to end their losing streak if they are to keep in touch with the teams above them.