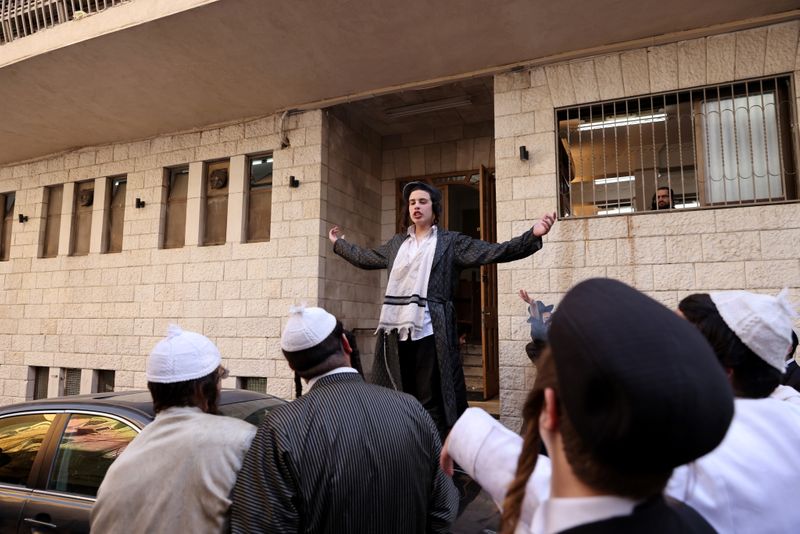 © Reuters. COVID-19 restrictions during Purim in Ultra-Orthodox neighbourhood of Mea Shearim in Jerusalem

JERUSALEM (Reuters) – COVID-19 curbs have curtailed celebrations of the Jewish costume festival of Purim, with Israeli police preventing parties and some rabbis urging people not to drink too much so social distancing is maintained.

Drawn from the biblical Book of Esther’s account of how the Jews were spared genocide in ancient Persia, Purim is commemorated with the wearing of all kinds of fancy dress costumes, donating food for feasts – and drinking to excess.

But this year, Israel, which began emerging from its third national lockdown on Feb. 21, reimposed night curfews for the long Purim weekend and limited access to Jerusalem.

Purim parties were banned, with fines for anyone hosting them. That led to spontaneous street parties in Tel Aviv. Police commander Ziv Saguy said they were giving out 200 fines an hour.

Long traffic jams formed on the road to Jerusalem as police tried to stop large groups of reaching the holy city for the festival. Some people ditched their vehicles and walked up the highway instead.

Excessive drinking is a key part of the festival but several ultra-Orthodox Jewish leaders took out a front-page ad in a community newspaper urging a more abstemious Purim this year.

“He who gets drunk loses his clarity of mind and is liable not to conduct himself with the necessary caution to safeguard his health”, the ad read, according to the Arutz 7 news site.

Israel’s tight-knit ultra-Orthodox community has been especially hard-hit by COVID-19. According to one Health Ministry official, they make up about 15% of the population but have at times accounted for as much as 35% of coronavirus cases.

Some ultra-Orthodox have also defied state-ordered closures of schools and synagogues, touching off clashes with police.

As Purim festivities wound down on Sunday, one such confrontation flared up in Mea Shearim, an ultra-Orthodox district of Jerusalem, when costumed celebrants put up an effigy of the national police chief, a Reuters photographer said.

Riot police in surgical masks closed in, removing the effigy and scattering the celebrants, some of whom yelled abuse at the officers while others danced. Saguy said two men were arrested.

The 3 worst ways people will use their next stimulus check, Suze Orman says

The 3 worst ways people will use their next stimulus check, Suze Orman says