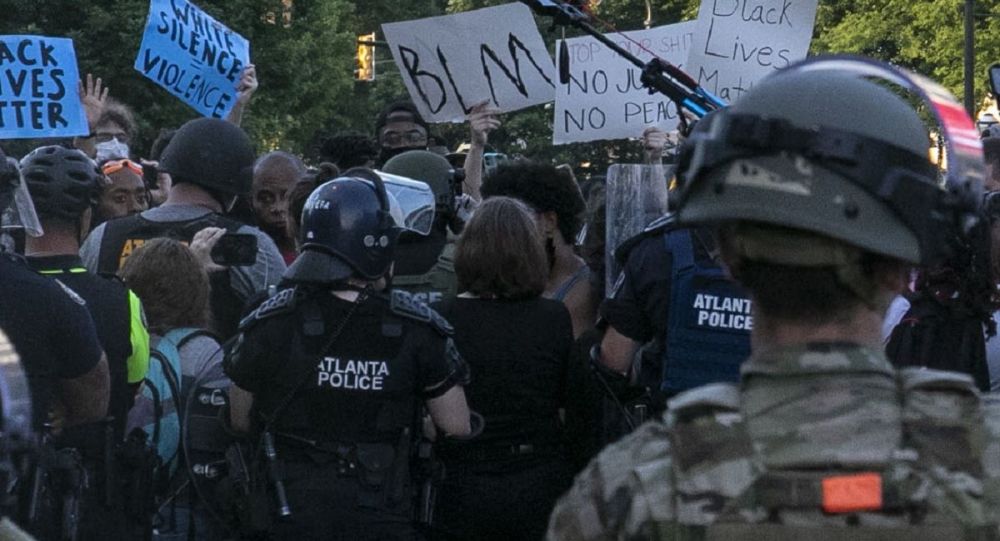 Calls to “defund the police” were heard across the United States during summer protests following the death of African-American George Floyd in police custody on 25 May 2020. In Atlanta, Georgia, the violence and deaths prompted the deployment of National Guard troops across the city.

Georgia’s House of Representatives passed a bill Wednesday that would block cities and counties in the state from cutting police budgets by more than 5 percent in comparison to the previous year, the AP reported.

The bill was almost entirely resisted by the Democratic party but three Dems – Reps. Mesha Mainor of Atlanta, Patty Bentley of Butler and Mike Glanton of Jonesboro – have sided with Republicans, voting in favour of the bill. All GOP members hailed the legislation.

It will now go to the Georgia Senate for further debate. The state’s upper house holds a 34-22 Republican majority.

If the Georgia Senate approves the bill and it will be enacted into law, local governments will also be prohibited from “defunding” the police by more than 5 percent over a “rolling ten-year period”, it says. There are some exemptions to the proposal – cities and counties will be allowed to make over-five-percent cuts if local revenues are expected to fall by more than a set number or if they have less than 10 officers overall. Cities should be able to guarantee a solid level of protection for their citizens – in this case, they would be allowed to abolish their police forces, the bill states.

The measure’s key promoter, Republican Rep. Houston Gaines of Athens, who introduced the bill earlier in February, believes that “defunding the police is a dangerous idea that would harm those that most need protection and put victims at risk”.

Following weeks of BLM protests in Georgia in the aftermath of George Floyd death in May, anti-police brutality activists and officials in Atlanta and Athens have debated plans to slash police budgets and abolish some structures. The violent riots across Atlanta that left four people dead, including an 8-year-old girl, prompted Gov. Brian Kemp to deploy as many as 1,000 Georgia National Guard troops in the city in July, as thousands more were already authorised for deployment in other parts of the state.

A protester watches as a Wendy’s burns following a rally against racial inequality and the police shooting death of Rayshard Brooks, in Atlanta, Georgia, U.S. June 13, 2020.

Gaines believes that the measure helping to prevent large budget cuts are crucial for Georgia:

“We’ve seen calls to defund the police in Athens and Atlanta, and we can’t let that happen in our state, so this is an important measure that’s going to keep families safe,” the Republican lawmaker said after the bill had passed in Georgia General Assembly’s lower house.

But it has also seen some severe critics, who believe that the measure contradicts the Georgia Constitution by undermining the powers of state public offices to have control over local budget-making, including in relation to law enforcement agencies.

Macon lawmaker James Beverly believes that the bill would be opposed in court, even if it passes though the Georgia Senate:

“It’s going to go to court, and in the courts, local governments, if they hold the constitution up, they have a fight to say we get to set up our own budget. Y’all can’t do that in the General Assembly,” Beverly insisted.

As Georgia lawmakers are in disagreement over the proposed state bill, another battle is prepared to be unveiled in the US Congress. Next week, the US House of Representatives will vote on another “defund the police bill” that has some key provisions that are contrary to the hearts of certain moderate Democrats – particularly a clause calling to end legal immunity for police officers accused of misconduct. Some Democrats argue that such a language would kill the bill in the House before it gets to Joe Biden’s table but authors of the measure remain firm about leaving the proposal as it is – legal protections for police agents should be curbed, they believe.

Russian man gets 8-year jail for passing secrets to China

How Ki & Ka was for my mom, Sardar Ka Grandson’s for the relationship I shared with grandparents: Arjun Kapoor

How Ki & Ka was for my mom, Sardar Ka Grandson’s for the relationship I shared with grandparents: Arjun Kapoor