EU makes first use of Magnitsky Act, on Russia 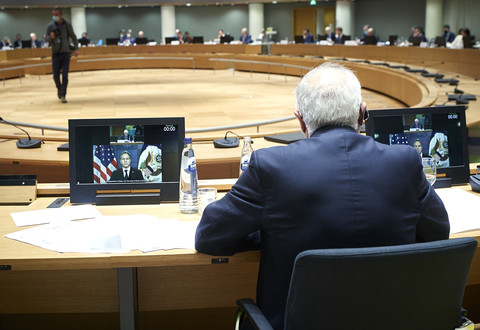 The EU has agreed to blacklist Russian officials guilty of wrongly jailing opposition figure Alexei Navalny, amid a new “low” in relations.

The asset-freezes and visa-bans ought to be in force in early March, EU foreign relations chief Josep Borrell said after meeting foreign ministers in Brussels on Monday (22 February).

The measures will be the EU’s first-ever invocation of its new ‘Magnitsky Act’ human rights sanctions, named informally after a late Russian dissident.

Navalny’s associates wanted the EU to also list Russian oligarchs, whose corruption he exposed and who benefitted from his being silenced.

The Magnitsky Act allows for that, legally speaking.

But Borrell said Europe did not have enough evidence to pin Navalny’s “persecution” on any one else for now.

“Maybe we don’t like the oligarchs … but if there isn’t a link we can prove in a court of law, we cannot use it [the Magnitsky Act]. I’m sorry, this is also the rule of law”, Borrell said.

The new EU sanctions come on top of previous measures over Russia’s invasion of Ukraine, chemical-weapons attacks, and cyber attacks.

They also come after Russia humiliated Borrell on his recent trip to Moscow by trash-talking the EU and expelling European diplomats while he was there.

Its behaviour was a “clear symbol [Russia] is not interested in cooperation with the EU, on the contrary, it looks to disengagement and confrontation”, Borrell said.

Russia had, “unfortunately”, become the EU’s “adversary”, he added.

Borrell was roasted by European media and politicians for letting himself be humiliated on his Moscow trip.

But he said all that had blown over on Monday.

It was just 70 or so MEPs out of 750 who had signed a letter calling for his resignation, Borrell said. “It’s less than 10 percent, so let’s put things in the right proportion,” he said.

“Relations [with Russia] are certainly at a low – there’s no other word for it,” Germany’s Heiko Maas said.

“At the same time, we need to talk about how to keep up a constructive dialogue with Russia,” he added.

Ministers were “united in support of the EU’s Russia policy. Navalny and all others unlawfully detained must be released,” she said.

The new US secretary of state, Anthony Blinken, joined the EU talks by video-link on Monday.

And he “welcomed the EU’s decision to impose sanctions against Russia under the human rights sanctions regime [Magnitsky Act]”, the state department said.

There is more division in the West on Russia than Monday’s sanctions deal might suggest, however.

The US has used sanctions against European firms building a Russia-Germany gas pipeline, called Nord Stream 2, which it says will cause strategic harm.

And the Polish foreign minister, on Monday, published an op-ed in the Politico news agency urging Blinken to get tougher if Germany went ahead.

But even the Russia-hawkish Baltic EU states were happy with Monday’s compromise as a first step.

And Leonid Volkov, a close associate of Navalny’s who lives in Lithuania, also saw some good in it.

“Even if it’s too little … it’s the first time personal sanctions are applied with regard to human rights violations, so it opens a way for further negotiation on this with Europe,” he said.

12 Sibling-Owned Brands That We’re Obsessed With

12 Sibling-Owned Brands That We’re Obsessed With