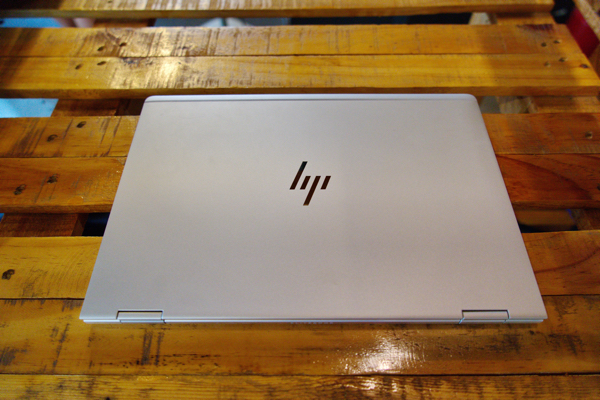 Think of business laptop and you may immediately conjure up an image of a functional but ultimately unexceptionally designed machine that gets the work done but isn’t something you would like to use on a daily basis.

That isn’t quite the case with HP’s new EliteBook x360 1030 G2, we will just keep calling it the EliteBook x360 from here on. There is an air of sophistication to this laptop that you don’t see too often in a business laptop. It doesn’t just look good but it also ticks the check boxes in other areas including security, durability and privacy, core features for businesses.

As far as design goes the EliteBook x360 is a stunning looking business laptop. Coated in silver with an aluminium unibody, it definitely has taken some design cues from Apple’s best. Admittedly, the new stylised HP logo looks strange but apart from that the aesthetics look great.

Lifting the lid reveals a 13.3-inch full HD display which produces very vivid colours though it isn’t as bright as other laptops that we have tested in the past. This may make it difficult to read out in bright sunlight but indoor settings, as where most office workers should be, were fine.

As it is a convertible laptop, thanks to the 360-degree hinge (hence the x360 monicker) it comes with a handy touchscreen that lets you navigate the EliteBook seamlessly even when using it in one of its four different modes.

You can, of course, use it as a normal laptop or a tablet but there is also the tent, where you can prop it like upside down “V” and display mode, with the screen facing up while the keyboard faces down.

Weighing in at just 1.28kg, the EliteBook x360 really is a featherweight laptop that we had no trouble taking along wherever we went. While it doesn’t win any awards for being the slimmest, it just as easily slips into any bag we could throw it in.

Of course with a laptop as slim as this, one must worry if HP had cut any corners with the ports in order to maintain its svelte shape. Fortunately, there are still a decent number of ports available so you won’t be trapped in dongle hell. Right below the screen you get a full-size keyboard with backlit keys The keyboard doesn’t feel too shallow and the keys are clicky though responsive. There is also a respectably large trackpad and a fingerprint reader on the right side for added security. There is even an NFC reader hidden just beneath the trackpad.

Apart from that, you get a nice stylish stylus that comes with the box. The stylus boasts over two thousand degrees of pressure sensitivity so it feels natural to write and draw on the screen.

We liked the nice little touch HP made by allowing the stylus to slide into the Smart-card reader for safe storage when it is not in use. has looks that completely complement the laptop.

Underneath the hood, the EliteBook x360 boasts an Intel Core i7-7600U processor along with 8GB of RAM and 512GB solid-state drive. All these specifications are configurable to meet your requirements and budget.

The EliteBook x360 scored a middling PCMark 10 score of 2,626. In practice, the EliteBook x360 ran smoothly functioning as a primary web browsing device, keeping more than 15 tabs opened proved no challenge to it at all.

The 512GB of storage feels constraining but there is the microSD card slot for expanding the memory.

As it comes with an integrated Intel HD graphics 620, the EliteBook x360 isn’t going to allow you to handle heavy graphics applications nor run high-end games. That is not to say that it is completely useless, it can still play older games at a lower resolution but you will need to dig far back into your catalogue to find something less intensive for it to handle.

Temperature wise, the EliteBook x360 actually runs very coolly throughout the time we tested it. The laptop actually manages to stay cool throughout usage. The only time when the laptop really heats up is when it needs to draw more power and dispense more heat during intensive graphics procedures.

The 720p webcam isn’t anything to write home about but it works all the same if you need to have that all-important video Skype call. The ports along the side of the HP EliteBook x360

The audio of the Bang & Olufsen branded speakers punctuate the EliteBook x360’s rich audio capabilities. The pedigree of the speakers speaks for themselves as the audio quality remains very clear and vivid, projecting voices and music to great effect. Despite sounding good, the designers should have reconsidered the placement of the speakers as they sound muffled thanks to their downward firing position.

Being a convertible laptop, the EliteBook x360 changes shape and form all the time, but the placement of the speakers at the bottom just doesn’t make sense. In tablet mode, the speaker is sandwiched between the screen and the keyboard portion of the laptop while in display mode the speakers are hidden behind the screen.

That being said, if you truly want to enjoy music and movies it is best to plug in a good set of headphones or speakers.

Coming down to battery performance, the EliteBook x360 is a very power efficient laptop able to last close to 10 hours with regular surfing which is very respectable and great for getting work done on the go. On a whole, the HP EliteBook x360 is a slightly unusual business laptop as it actually sports good looks.

With its 360 degrees hinge, it offers lots of versatility for business users whether they need to use for serious work as a laptop or hold it up as a tablet during presentations. The added benefit of having additional security features doesn’t hurt and the exceptional battery life is a big plus for mobile workers.

As it is designed to be an enterprise class notebook it has a high price tag of US$1,830 (RM7,843) which to be honest, is a tad expensive for the specs that it comes with considering it has integrated graphics only.

Clearly, the EliteBook x360 is intended for a specific audience, namely mobile workers who need a decent performing and long lasting laptop. For the rest, there are cheaper and more economical options out there. Dell XPS 15 combines beauty and performance in one sleek package

Lenovo YogaBook: Have notebook, will travel